What is a Hydroclone?

A hydroclone is a static device that applies centrifugal force to a flowing liquid mixture so as to promote the separation of heavy and light components.

Another key difference between hydroclones and centrifuges is cost. Centrifuges are expensive precision rotating machines that often need sophisticated control, whereas hydroclones have no moving parts and usually no controls at all, so they are very reliable, lower cost devices.

Hydroclones and centrifuges are complementary rather than competing devices. If gravity alone will settle a significant portion of your solids in a minute or two using a quick bottle test, you should investigate hydroclone separation. If settling takes much longer than this, then you may need a centrifuge or other separation method.

What are the uses and limitations of Hydroclones?

A hydroclone is most often used to separate “heavies” from a liquid mixture originating at a centrifugal pump or some other continuous source of pressurized liquid. A hydroclone is most likely to be the right choice for processes where “lights” are the greater part of the mixture and where the “heavies” settle fairly easily.

Generally, hydroclones are used in continuous flow systems so that the instantaneous liquid inflow to the hydroclone is equal to the total instantaneous outflow of “lights” plus “heavies.” In cases where “heavies” are a very small part of the whole liquid, it is sometimes advantageous to add a closed “accumulator” on the bottom outlet of the hydroclone. ChemIndustrial’s modular construction methods make it easy for us to provide accumulators configured for specific applications.

In some applications, ChemIndustrial hydroclones are capable of sharp separations of “heavies” and “lights”. In other situations, they are used for incremental enrichment, reducing the load on other, more costly separation equipment and improving the overall operating economics.

Hydroclones are generally not recommended for removing long fibers from liquids.

We manufacture world-class hydroclones in Cedarburg, Wisconsin, USA. Cedarburg is strategically located in the Chicago-Milwaukee industrial corridor. This location allows us to access some of the finest machining and fabrication shops in the world. This helps us excel in the design, production and technical support of our modular hydroclones and hydroclone systems. 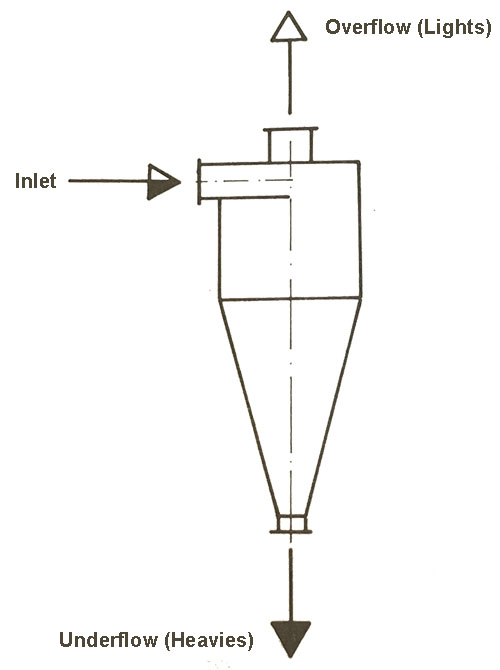